What if the writer can, with words, create images in a reader’s mind that primarily stimulate setting and character in a fiction story. It’s a matter of choice, imagination, purpose, and style, and very individual. Using basic-story information of plot momentum, let’s augment basic story action-information with setting and characterization with authorial style changes as examples. They went to the birthday party of a man. Is it appropriate to develop setting and character in scene or narrative when the plot purpose is to simply move characters to a party? Will it inhibit or captivate a reader’s interest? Consider these examples. … Read More…

If your fiction prose-stories don’t attract readers, one culprit may be nonjudicious use of the passive voice related to style and craft proficiency. To moderate style, a writer needs to know passive construction and understand both the effective and often-detrimental uses of passive.  Here’s a concise, valuable overview.

EXAMPLES: Compare the effects of these two passages:
Passive
The inscriptions on the gravestones were obscured by darkness but the marble was still cracked by Jason’s hammer-strike as a photograph was taken by a hidden camera.

Active
Darkness obscured the gravestone inscriptions but Jason cracked the marble with a hammer strike as a hidden camera took a photograph.

CONCEPT.
A common purpose of passive use is to change the focus of attention in the sentence from the subject to the object.

Active:  The whale swallowed Pinocchio.  An ACTIVE sentence emphasizes who did something (the doer).

Passive:   Pinocchio was swallowed by the whale.  In the PASSIVE, the object becomes more important than the “doer” and the “doer” of the action becomes  the subject.

Active: The intruder murdered the woman.  (The intruder is the subject “doer”; woman is the object.)

Passive: The woman was murdered.   (Object becomes the subject, the “doer” is not revealed.)

Passived: The woman was murdered by the intruder. (“Doer” is revealed at  sentence end using “by” followed by the “doer” noun.)

USE OF PASSIVE
In essence, passive is often used when the FOCUS is on:

1) what happened–focus is on the object:

Passive. I was attacked by a stranger.  Compare active:  A stranger attacked me.

2) who carried out the action.

3) how the action was carried out:

The solo was played beautifully.

5) does not want to be identified

TAKE AWAY.
Undoubtedly, most successful prose-fiction storytellers don’t need to spend too much time worrying about the details of passive tense. They default to creating by instinct. But for some literary fiction styles, unnecessary overuse of the passive may be detrimental; the passive may be weaker, wordier, and more indirect than the active which is direct and vigorous. And a passive has potential for erasing who performs the action therefore avoiding the agent’s responsibility for the action.  [Example: Crucial statistics were deleted from our files.]

Although avoidance of the passive has been advised by many teachers of writing, the passive is often the better choice for clear expression: when the actor is unimportant, unknown, or needs to be hidden; when the focus of the sentence is on what is being acted upon; to maintain point of view; or simply when it sounds better. (see Bryan A. Garner and Joseph M. Williams below).

In summary, knowledge and controlled use of the passive in literary fiction stories can improve a writer’s style with clarity and focus on verb, subject, object emphasis that improves reader engagement and understanding.

Thanks for reading.
William H. Coles

ANNOUNCING PODCAST OF SHORT STORIES READ BY THE AUTHOR’
NOW AVAILABLE AT YOUR SOURCE FOR PODCASTS.
STORY IN FICTION by William H. Coles 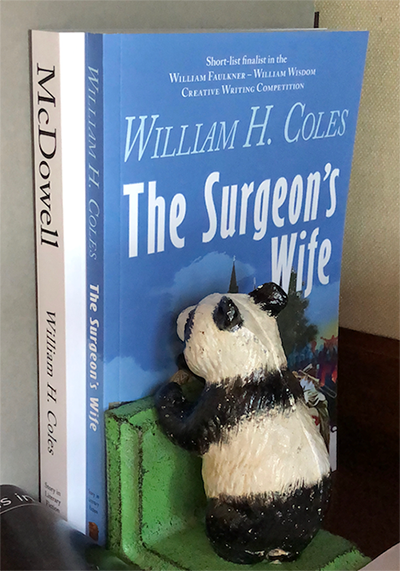 Looking for a good book of literary fiction?
TRY:  The Surgeon’s Wife by William H. Coles
[and other novels and short stories: McDowell, Guardian of Deceit, The Spirit of Want, Sister Carrie, Illustrated Short Fiction of William H. Coles: 2000-2016]

Great literary fiction storytelling as an art form is not for all readers, and its success is not measured solely on volume of commercial book sales but rather the number of readers moved or enlightened by characters and story, usually about what it means to be human. Many of the literary stories that have lasted into new generations of readers have important, common characteristics; here are the principles. 1. Characterization. The fictional humans that populate successful literary fiction seem real to the reader, either in the context of the reader’s world, or the story world created by the author. It … Read More…

In general, in fiction, backstory should only be employed to advance the front story.  For excellence, the concept is almost always required in short stories but is also useful in the broader sweep of a novel. Example 1. Scene: no backstory. Story momentum intact. The curtain parted just far enough for Maria to step forward into the spotlight and then closed.  She bowed to the audience applause and cupped one hand in the other in a gesture of formality.  She nodded to the piano player who, after a pause, started playing to guide her to the always difficult major-seventh opening … Read More…

Concepts for making your story writing better. A story in fiction, to be admired and remembered, needs, among many, these essential elements—action, conflict, and active imageic-words. In-scene storytelling is often more effective to engage and involve readers than telling-narration. The first example tells of a happening in narrative; the second, for comparison, is written in scene. Narrative Harry flew a kite at the beach to entertain his invalid son but the kite got away, and Harry seethed with anger. Many writers would think that changing from past to present tense would provide immediacy of action. Harry flies a kite at … Read More…

Every living human has a story to tell, and most believe they’ll get around to it someday… and if they get around to it, they’ll be blissfully successful even if totally unaware of what a story is and how difficult it is to do well. Of course, stories can be how you want to think they are–memoirs, essay, non-fiction, history, character sketches, creative journalism, diary entries, or even letters, but the literary story (a written work that is considered lasting and of artistic merit) has proven to be the most long-lasting written form for the last few centuries. It’s one … Read More…

In Aspects of the Novel (1927), EM Forster wrote ideas, now cherished by many writers, about flat and round characters. Here are highlights of ideas expressed in the book. Flat characters, in pure form, are constructed around a single idea or quality, are so consistent without change that they are easily recognized and remembered, may be summed up in a few words. not as great achievements as round characters, and are best when comic rather than tragic.  Contrary to many contemporary thinkers, flat characters are very useful to authors; they “never need reintroducing, never run away, have not to be … Read More…

If you write a literary story to engage, involve, and enlighten receptive readers, you should (1) as an author, know the story world well and create characters from their unique worldviews (2) create a narrator who is of the story world, not you the author, (the author creates the narrator with that narrator’s unique worldview, experiences, and memory). Author as narrator is a habit that constricts creativity and promotes narrative description from a fixed reality rather than creating with imagination in a literary fiction story. Imagined and creative storytelling inspires mystery, suspense, pending discovery, moral perplexity, and surprise in the … Read More…

Improve writing of fiction stories. Literature (written works of superior, lasting quality as an “art form” and fiction (imagined story and characters) are specific concepts that vitalize a writer to engage, entertain, and enlighten readers and achieve acceptance and endearment of the writer as storyteller and master of written works. Engagement of a reader is a beneficial authorial achievement; invariably readers enjoy and learn from stories they feel a part of. To improve the skill, writers must find and correct individual strengths and weaknesses compatible with their style. No golden rules exist; but essential creative ideas abound in the talented … Read More…

How funny are you? Do you make people smile and laugh? Is anyone void of humor? For fiction writers, these are not trivial questions. A literary writer builds and molds character to an imagined story. Since most characters need some aspect of humor, what is humor all about for a writer? I  interviewed  two comedy professionals (husband and wife): Kevin Nealon, film actor, TV (Weeds, Man with a Plan), standup comedian, and in cast of Saturday Night Live (1986–1995, 174 episodes) and creator of memorable characters such as Hans, Mr. Subliminal, and Weekend Edition; Susan Yealey, television actor and show … Read More…