What have you achieved? Is it what you wanted? Are you satisfied? Here’s the idea. On occasion, life forces new directions that demand a new “you.” How would you make a better “you”?  Take this example of a doctor at the top of his profession who loses all and changes who he is to survive. Literary fiction can show significant change by creating dramatic stories with theme and meaning. Here’s an example of how. (Excerpt from the award-winning novel “McDowell.” mcdowellbycoles.com)

Hiram McDowell is an arrogant, proud doctor. He’s ignored and stomped on a lot of innocent people, failed to value friendships, and failed in love and family, but he’s listed in the top two hundred of America’s most influential people. Then he’s accused of a felonious death, goes to prison, escapes, and survives as a criminal fugitive. Here’s a glimpse of his new life–a desolate wilderness country-scene in a Montana farm house where a family with a disabled child has taken him in. The experience changes who he will become.

On a summer evening after dinner, Selena came out from her bedroom in an ankle-length white nightgown, barefoot, carrying a hand-blown glass bowl partially filled with water. She sat on a three-legged stool. Maud closed her book and laid it on the floor by the chair. “Pops,” she called to the kitchen. Pops came out and sat in a chair at the table. Selena’s freshly washed and dried long hair glowed with a youthful golden radiance. With slow deliberation, she dipped the fingers of her right hand in the water inside the transparent glass vessel on her lap and she began slowly circling the rim until a sound emerged, course and variable at first but with a quick adjustment, even and constant with a strange ethereal quality. She sang with a single tone in perfect pitch with the sound from the vessel, her voice was pure and full without vibrato. Then she progressed to intervals–a minor third, a sixth, a major seventh. She continued for fifteen minutes then unassumingly stood and went back to her room. No one spoke, struck by the beauty of the presentation. Maud sat with her head back, eyes closed. Pops remained at the table, his head in his hands.
The next morning Hiram saw Maud reading and drinking from her ever-present cup of coffee.
“That was beautiful singing . . . what Selena did last night,” he said. “She’s unique. I’ve never heard a voice like that. Her presentation was beautiful.”
Maud said nothing.
“She should sing out in public. Make a recording to sell. It’s really cheap to do.”
“You’d see her doing night clubs. A celebrity?”
“No. But she could entertain a lot of people and make money doing it.”
“She used to sing at the church before it closed.”
“She has a spiritual quality that shouldn’t be limited to a church.”
“What do you think she wants?” Maud asked.
“I don’t think she knows her potential,” he said.
“To do what?”
“Produce and enjoy a valuable profession entertaining.”
“And why would she do that?”
“To be successful.”
“But what is this success? What do you think that means to her?”
Hiram tried to block his rising frustration at Maud’s persistence in questioning the obvious. “I don’t know. Admiration for her talent. Financial independence.”
Maud got up bringing her coffee cup and sat down at the table where Hiram was working.
“You were pleased with what she did for you. She made you feel good.”
“I was awestruck.”
“She did it for you, you know. She likes you. And she wanted to give you something of value. Something without strings attached. Uniquely hers, too. She doesn’t think in terms of success and money. Subtle meanings, competition, maneuvering mean nothing to her.”

So what’s happened? He’s beginning to evolve from selfish to selfless, from taking to giving, from indifference to caring. As he makes a difference in the lives of others, he’s rewarded with new satisfaction never before experienced.

This story is literary fiction–imagination, drama, in-scene delivery with strong characterization, themes and meanings, and a purpose for telling a story. Literary fiction enlightens readers with discoveries that may awaken self-awareness and human understanding.

You can READ MORE of McDowell’s narrow escapes and growing satisfaction with a new life he never would have anticipated. Available in print, eBook, online, audio. mcdowellbycoles.com 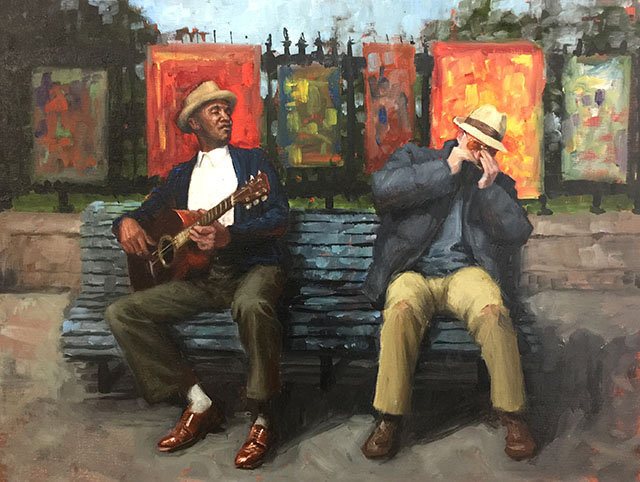