Literary imagined scenes come alive with CONFLICT and ACTION in language, narration, story, and dialogue. It’s not inherent for most writers striving to write literary fiction. To start, writers and storytellers are dependent on these basics:  1) literature is written works that have merit and lasting potential as an art form, and 2) fiction creates imagined events and characters. For success in inserting conflict and action, writers master vibrant in-scene writing–an important staple of effective story delivery–supporting concrete-imagery, credible dialogue, and action prose in narrative.

Here are examples of conflict and action in dialogue, narrative, and a descriptive scene using senses, thoughts and perceptions. These examples are not exclusive. With an active imagination, a myriad of ways can be created by an author to achieve action and conflict in creative fiction. The examples:

1) A family whose parents have just been buried are dividing the parents’ possessions among them. Carrie, the youngest, is working in the tool shed. Martha, Henry, and Jessie argue over who gets items in the house–and no one wants the responsibility of bringing up Carrie.

Now, to make the scene alive, conflict is inserted, mainly in dialogue. Conflict results in action, the fuel for great fictional prose.

“I am not taking on responsibility for a seventeen-year-old,” Henry said, pausing mid-brushstroke and turning from the window frame he was painting to make the house sellable.
“Quiet, she’ll hear you,” Martha said from the kitchen, throwing a cracked and chipped casserole dish into a metal trash can with a crash of splintering glass. She turned back to scrub glassware in the sink.
Jessie went to the front door to look for Carrie. “She’s carrying stuff out of the tool shed,” she said.
“Don’t let her throw out any power tools,” Henry said.
“She’s laying things out for us to see.”
“She’ll take the best.”
“She doesn’t want power tools!”
“Anything of value.”
“Stop it. She’s your sister.”
“You think so much of her, you take care of her.”
“I’ve only got a one-bedroom apartment,” Jessie said, picking up a broom and sweeping with a flurry of useless strokes.

From the novella Sister Carrie http://shop.storyinliteraryfiction.com/product/sister-carrie/

2) For conflict in a narrative passage, here’s an excerpt from Conrad’s Heart of Darkness.

” . . . I was circumventing Kurtz as though it had been a boyish game. I came upon him, and, if he had not heard me coming, I would have fallen over him too, but he got up in time. He rose, unsteady, long, pale, indistinct, like a vapor exhaled by the earth, and swayed slightly, misty and silent before me; while at my back the fires loomed between the trees, and the murmur of many voices issued from the forest. I had cut him off cleverly; but when actually confronting him I seemed to come to my senses, I saw the danger in its right proportion. It was by no means over yet.”

3) Here is a remarkable scene from Faulkner’s “Barn Burning” where “alive” is achieved without describing action per se, but with use of accurate, imaginative language and sensual perceptions. http://jerrywbrown.com/wp-content/uploads/2014/02/Barn-Burning-by-William-Faulkner-1.pdf

The store in which the justice of the Peace’s court was sitting smelled of cheese. The boy, crouched on his nail keg at the back of the crowded room, knew he smelled cheese, and more: from where he sat he could see the ranked shelves close-packed with the solid, squat, dynamic shapes of tin cans whose labels his stomach read, not from the lettering which meant nothing to his mind but from the scarlet devils and the silver curve of fish – this, the cheese which he knew he smelled and the hermetic meat which his intestines believed he smelled coming in intermittent gusts momentary and brief between the other constant one, the smell and sense just a little of fear because mostly of despair and grief, the old fierce pull of blood. He could not see the table where the Justice sat and before which his father and his father’s enemy (our enemy he thought in that despair; ourn! mine and hisn both! He’s my father!) stood, but he could hear them, the two of them that is, because his father had said no word yet: . . .

It’s a complicated subject to grasp, much less master and incorporate, but essential for literary fiction storytelling. Here are posts and essays for further study: 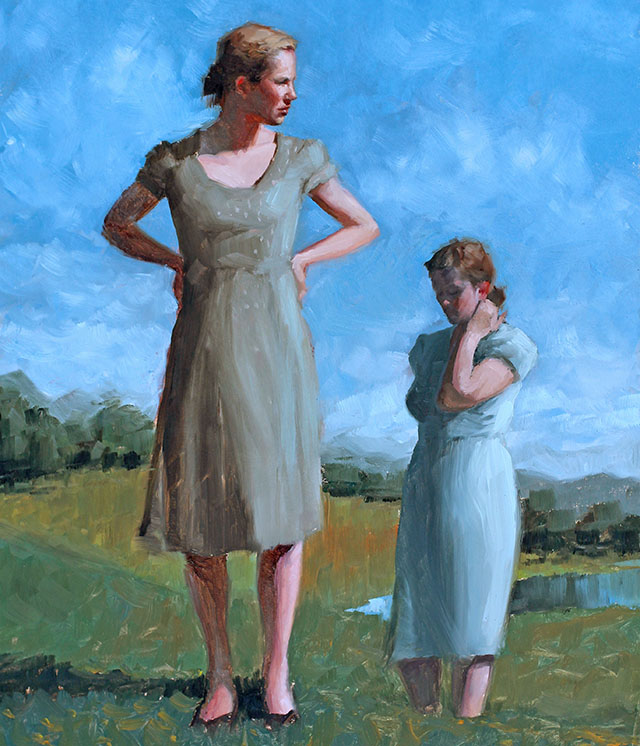