This down and out musician has broken up with his girl in New Orleans so he pockets his blues harmonica, drags his guitar behind him, and plods on the road to Yazoo City, Mississippi, to find a gig. He’s miles away on a back road in a poverty-infested rural countryside when a girl about seven appears and offers him a wad of chewing gum she takes from her mouth with thumb and forefinger. He politely declines but to respond to her generosity, he plays a tune, Empty Bed Blues, on his harmonica. She’s unimpressed. During a doze, the girl grabs his harmonica and runs off. He follows her into a ramshackle two-room paint-peeling-gray clapboard-house where her mother lies on her back on a bare mattress, both legs bent at the knees, her bloated abdomen contracting and showing a matted-hair football-shaped blob with each labor contraction. Damn, it’s about to arrive. Our hero has never even seen or thought about how babies come out.

Wikipedia tells us: “In fiction a MACGUFFIN (sometimes McGuffin or maguffin) is a plot device in the form of some goal, desired object, or other motivator that the protagonist pursues, often with little or no narrative explanation. The specific nature of a MacGuffin is typically unimportant to the overall plot. The most common type of MacGuffin is a person, place, or thing (such as money or an object of value). Other more abstract types include victory, glory, survival, power, love, or some unexplained driving force.”

“The MacGuffin technique is common in films, especially thrillers. Usually the MacGuffin is the central focus of the film in the first act, and thereafter declines in importance. It may reappear at the climax of the story but sometimes is actually forgotten . . .”

Okay. Thanks Wikipedia. In our story, the harmonica is a plot device, a MacGuffin. But fiction writers crave significance. So how does a plot device become a symbol? Let’s look to Wiki again; now things get a little wonky: “SYMBOLS are the basis of all human understanding and serve as vehicles of conception for all human knowledge. Symbols facilitate understanding of the world in which we live, thus serving as the grounds upon which we make judgments. In this way, people use symbols . . . to make sense of the world around them . . .” Okay Wiki. Symbols impart meaning about people and the world. Let’s explore more.

Two older couples are on tour in India, one married, the other in a relationship. The married woman wears an extravagant diamond necklace inappropriate on a tour through a poverty-stricken country, a symbol of an arrogant man’s wealth and status and his domination of a submissive woman who detests wearing the necklace in public. The necklace is stolen and the woman dies from an illness contracted from the thieves. For the rest of the trip, the in-a-relationship couple grieve for their friend and the woman works tirelessly to relieve the suffering of the destitute poor. The man admires the decent nobility and gracious compassion of his partner and near the end of the tour he buys an inexpensive jade necklace to commit to the marriage the woman desires as the ultimate expression of his love and esteem. Two necklaces acting as different symbols both driving plot.

MacGuffins and symbols are both useful in literary fiction storytelling but rarely are they the purpose for the story; instead, they are discovered, defined, and refined in late stages of revision.

You can READ both “ON THE ROAD TO YAZOO CITY” and “THE NECKLACE” online FREE or in print (also in audio free) with these links:
On The Road to City
The Necklace

Guy de Maupassant and Henry James are two (of many) who have used a necklace as symbol in fiction. Read an ANALYTIC COMPARISON of de Maupassant and Coles stories here: https://www.enotes.com/homework-help/compare-contrast-necklace-coles-maupassant-617243 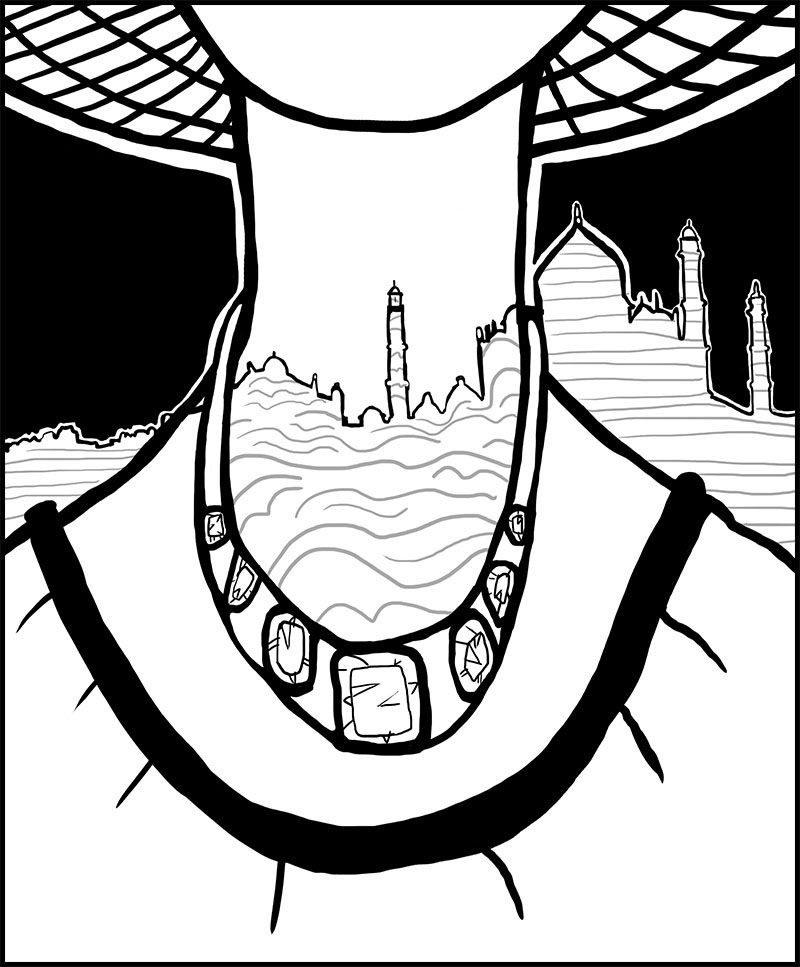 You could SHARE THIS LINK too for original story examples, essays, interviews, a workshop, and illustrations. storyiniteraryfiction.com. (free)

And thanks for reading!

1 thought on “Ferreting out MacGuffins in a literary-fiction Story”