Showing story and character in action-scenes with concrete imagery, supportive narration, and dynamic prose enriches display of character emotion, morality, desire, history, and worldview… all with pleasurable, enlightening, and lasting effects on readers. Of course, narrative telling is important–it can be more figurative, abstract, and metaphorical–but for intensity and impact, in-scene action is often the better choice to develop character with story.

The first example tells of a happening. There is no action or significant characterization:

Harry flew a kite at the beach to entertain his invalid son but the kite got away, and Harry seethed with anger.

A wind gust elevated the dragon kite and the string ran through Harry’s hand fast enough to hurt.
“Let me do it, Daddy,” his son Raymond said as he limped to Harry’s side. The boy held out his hand that, when awake, trembled nonstop from a congenital palsy. Could he hold the string? Fly the kite? He wanted to so badly.
“Hold tight,” Harry urged placing the string in the boy’s hand. The kite dipped then suddenly soared, the string taught again.
The boy cried out. “I dropped it.” Harry reached out but the kite had ascended too far to grab the trailing string.
The untethered kite disappeared, driven out to the sea by a gusty off-shore wind.
“I didn’t mean too,” the boy said, “Please don’t hit me.”

Historically, great literary fictional characters reveal the complexities of being human through memorable, riveting, thought-provoking characterization that lasts in the collective human consciousness for generations.

A major element of creating a great character is CHARACTER-BASED PLOT where a character’s thoughts, feelings, and actions are often integral to logical plot-progression rather than a character simply reacting to fatalistic or serendipitous plot events.

A. Character reacting to plot events:

1) Fatalism.
Pablo spotted the meteorite as it plunged through the atmosphere and he unsuccessfully ran for his life.

2) Serendipity.
Homeless Willy was starved and he walked the streets for a handout when he came across a ham and cheese sandwich wrapped in cellophane lying on the sidewalk.

Mary, fed up with her lying abusive husband, drove with her children to live with her mother in Canada and when she came to the mile-long narrows suspension-bridge her life-long fear of heights made her ignore a “road closed” sign and she detoured onto a wintery road in an attempt to reach the ferry. The car skidded on black ice plunging over a cliff killing all.

In essence, a meteorite kills the man (fatalistic), a hungry man finds food (serendipity), a mother’s fears and distress kill her and her family (character-based plot).

Gustave Flaubert has a scene in Madame Bovary that uses character-based plot development with both in-scene and narrator perspective to show character individuality and complexity. The basic plot is: Emma Bovary convinced her husband, Charles, she needed piano lessons as a ruse to meet her lover in town . . . and, after a few weeks, everyone thought her piano playing improved.

One evening when Charles was listening to her, she began the same piece four times over, each time with much vexation, while he, not noticing any difference, cried– “Bravo! Very good! You are wrong to stop. Go on!”
“Oh, no; it is execrable! My fingers are quite rusty.”
The next day he begged her to play him something again.
“Very well; to please you!”
And Charles confessed she had gone off a little. She played wrong notes and blundered; then, stopping short–
“Ah! it is no use. I ought to take some lessons; but–” She bit her lips and added, “Twenty francs a lesson, that’s too dear!”
“Yes, so it is–rather,” said Charles, giggling stupidly. “But it seems to me that one might be able to do it for less; for there are artists of no reputation, and who are often better than the celebrities.”
“Find them!” said Emma.
The next day when he came home he looked at her shyly.
“Madame Liegard assured me that her three young ladies who are at La Misericorde have lessons at fifty sous apiece!”
[Emma} shrugged her shoulders and did not open her piano again. But when she passed by it (if Bovary were there), she sighed– “Ah! my poor piano!”
And when anyone came to see her, she did not fail to inform them she had given up music, and could not begin again now for important reasons. Then people commiserated her– “What a pity! she had so much talent!” They even spoke to Bovary about it. They put him to shame, and especially the chemist.
“You are wrong [. . . ] my good friend [. . .] by inducing madame (Emma) to study; you [would be] economizing on the subsequent musical education of your child.”
So Charles returned once more to this question of the piano. Emma replied bitterly that it would be better to sell it. This poor piano that had given her vanity so much satisfaction–to see it go was to Bovary like the indefinable suicide of a part of herself.
“If you liked,” he said, “a lesson from time to time, that wouldn’t after all be very ruinous.”
“But lessons,” she replied, “are only of use when followed up.”
And thus it was she set about obtaining her husband’s permission to go to town once a week to see her lover. At the end of a month she was even considered to have made considerable progress.

READ award-winning novel, THE SPIRIT OF WANT as a prime example of character-based story where a character’s intellect, drive, and capabilities bring her to a point of great potential as a lawyer and a woman but her selfish needs and indifference to others drive the main plot and subplots that lead to tragic consequences for all who know and care. 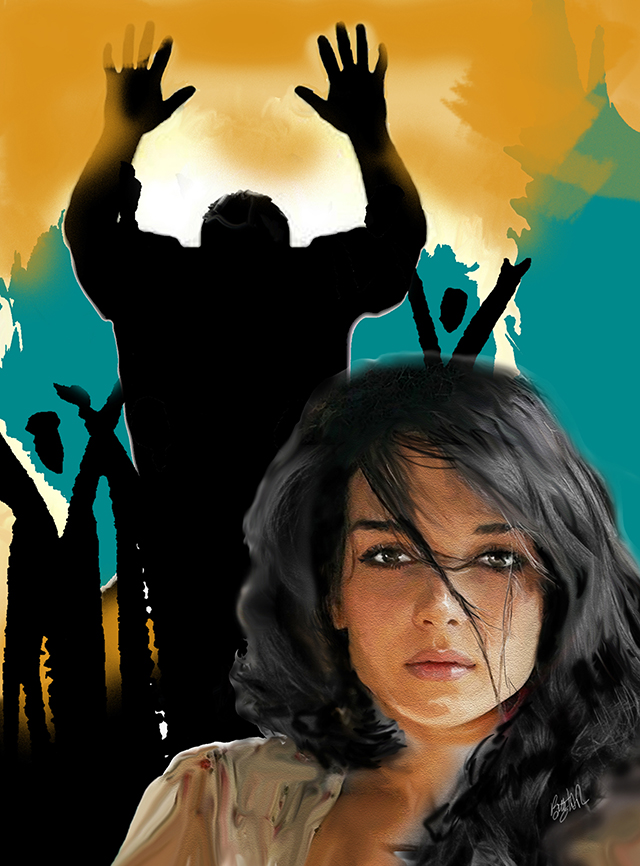 Cover illustration for the novel The Spirit of Want by William H. Coles. Illustration by Betty Harper